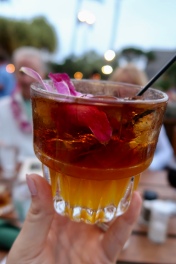 Hello everyone! Can you believe that it is already almost April?! Time is flying by this year!! But I didn’t want another day to pass without sharing some video, pics, and details from our trip to Maui last week! We spent the week at two different resorts to celebrate my brother’s 21st birthday but it also just so happened to be the exact same week that we were in Maui for the second half of our honeymoon last year!! I wanted to share some travel details below to help you plan your next vaca!

Hotels: We spent four days staying at the Hyatt Regency and four days staying at the Montage Kapalua Bay. Both resorts were actually amazing and we had killer views. We stayed in a two bedroom suite at the Hyatt that had a full living room, mini kitchenette type space and we were so close to the beach, it literally looked like we were almost on top of it. The Hyatt Regency was so much fun! They had an awesome pool with a giant waterfall that you swam through to get to a swim up bar, there were penguins there and flamingos walking around, and literally ten steps away was the beach. We also had access to their Hyatt Club Concierge room which offered different snacks and drinks to us throughout the day. The Montage Kapalua Bay was just unreal. We stayed in this crazy three bedroom villa in Building 1 (check out the villa tour video here!) so we had panoramic views of the ocean. We only went out to eat twice when we were here because the villa was so amazing and we just got groceries and cooked there and enjoyed the sunset from the balcony!

Pools: Like I said, the Hyatt Regency had a really fun pool but OMG it was freezing!! I didn’t even get fully in it. But we also had access to go next door to the Hyatt Residence club and they had a giant pool that was actually heated! The Montage had the coolest pool. We spent a lot of time in the adult infinity edge pool but all of the pools were connected by stairs and waterfalls so we could make our way down. There were these cool jacuzzi beds in the pool and little coves behind waterfalls that you could swim behind to steal a smooch/ jump out and scare people.

Beach: The beach at the Hyatt Regency was so close and honestly it was almost always empty. It is just one giant stretch of long beach but you really didn’t want to play in the ocean there because of sea urchins and rocks. We had to walk down the beach a ways to go boogie boarding. At the Montage, there was one beach that filled up really fast and honestly, we just wanted to be by the pool anyways, but we did go snorkel a couple times out there and there was a TON of wildlife, as you see in the video! I’ll share some more crazy stories below…

Food: Gosh, isn’t food like the best part of any vacation?? We ate and drank SO well and I won’t bore you with every detail but my highlights were definitely the California rolls from Japengo at the Hyatt Regency (I got another order after I scarfed down my first. Best sushi I have ever had in my life!!!), strawberry pie from Monkeypod, ahi poke tacos from Hula Grill, grilled prawns and filet mignon from Cane & Canoe at the Montage, and our tasting menu (mostly the homemade truffle pasta and the ginger ahi poke) from Merriman’s. Thank goodness I packed a lot of one pieces this trip because lil mama was very full every night.

Activities: Well despite it being kinda crummy weather half the time time, we did not let that stop us! We went to the Old Lahaina Luau which was one of the best I have been to. They didn’t have fire dancers which was a bummer but I really enjoyed the show because it was fast paced and I didn’t get bored. We went boogie boarding in Lahaina, snorkeling in Kapalua and saw about 6 turtles and A 12 FOOT SHARK!! I am so mad we didn’t get it on the GoPro but once my brother heard me say there was a shark, he was outta there. It was just a giant reef shark and wouldn’t hurt us but still, pretty crazy! We also went zipling with Kaplua Ziplines and that was insane!!! It was sosososo fun and we were SO high up! On some of them, you hit speeds up to 60 mph so it was no joke!

Transportation: We flew Hawaiian air and the 5 hour flight from Seattle really wasn’t too bad. We got a rental car because we knew we had so many places to be/ we were going to be at two hotels.

In conclusion, I would highly recommend both hotels to visit the next time you’re in Maui. The Montage Kapalua Bay is extremely nice and you’re going to pay extra for that extremely nice-ness but there really is no topping it. The Hyatt Regency was a very very nice hotel with lots to do and I would definitely go back there again!

Let me know if you have any questions in the comments and I’ll be sure to answer them!

In case you missed the link above, here is a brief tour of the Montage Kapalua Bay 3-Bedroom Villa we stayed in. I was just taking video for fun and decided to just show the whole place so it is nothing official haha

Also, here is our honeymoon video again because I love being nostalgic one year later….

One thought on “Maui Wowie”

Turn down for Walt 🏰
I glove you 🖤
this weather is snow laughing matter 🌨
Icy what you did there...❄️
when life gives you lemons, pray they’re lulu
Post a few more @disneyland photos? Don’t mind if I bibbity bobbity do