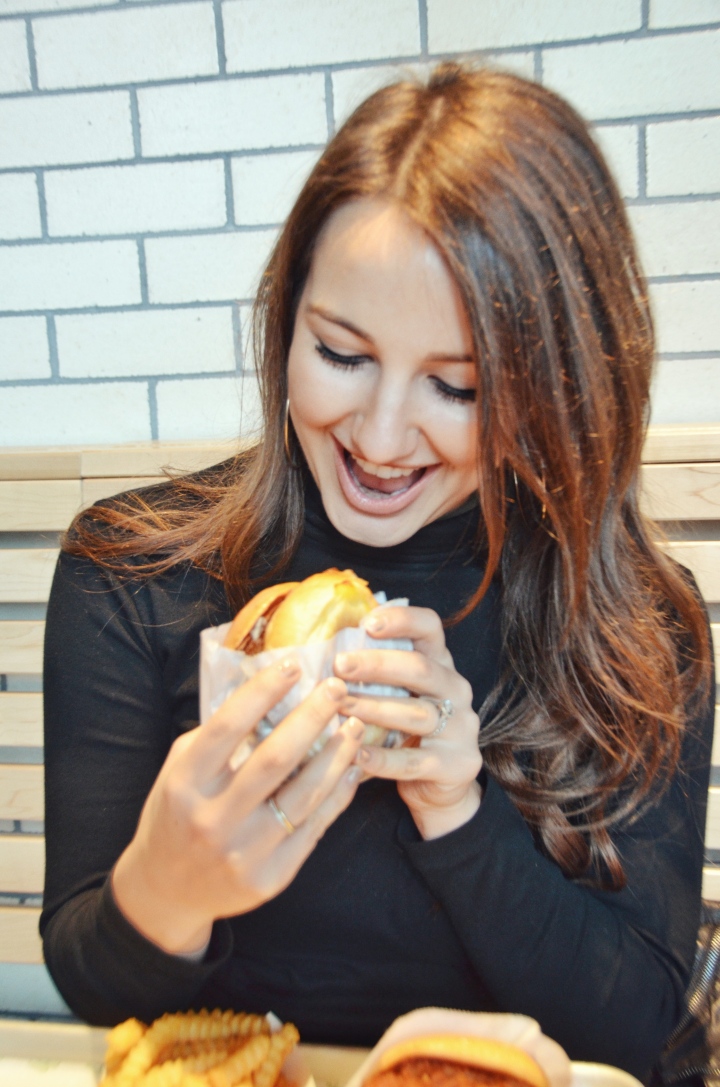 Long time, no talk! Wow, time sure does fly when you’re swamped with work & adult responsibilities pile up, ammi right?! However, I got to take a little break from the hustle and bustle and try out Seattle’s FIRST Shake Shack!! I. Am. So. Happy. This. Is. Here. Alec and I are a divided household as Shake Shack is my crown jewel burger while his heart bleeds for In-N-Out. I just love Shack Shake. The Potato Buns that melt in your mouth, the perfect cheese to patty ratio, the salty seasoning, and there’s so many more options than INO (that’s in n out if you caught on). So what is my review of Seattle’s first Shack? Especially their custom Seattle burger? Let me tell ya….

So first of all, let me tell you our order. Bear in mind there were three of us (hi, mom & Alec) and we ate it ALL (almost). We got a Shack burger, another Shack burger, one hot chicken sandwich, one regular chicken sandwich, one Montlake Double Cut (that’s the special one), one crinkle fry, another crinkle fry, one pumpkin pie custard, one iced tea, one water, and one soda. Animals.

Let’s start off with the good stuff…The Montlake Double Cut is made especially at this Seattle Shack only. It’s made with a bun from Macrina Bakery (that’s in Seattle), Beecher’s cheese (aka Seattle’s cheese), and beef grown in, you guessed it, Seattle. There is some caramelized onions (which I don’t normally like), and Dijon mayo (which I don’t like….see this video…) but LET ME TELL YOU WHAT. This burger was outstanding. My first bite, I got a pretty solid mouthful of Dijon but after that, I hardly tasted any, which I wasn’t mad about. It was by far the juiciest/ messiest burger we had there but the flavors were much more complex than an ordinary burger. Alec had a few bites but was too occupied with his other multiple burgers. I would highly recommend to try this one-of-a-kind burger if you find yourself in the Seattle Shack.

Next I’m skipping forward to the pumpkin pie custard. I was stoked because pumpkin pie is one of, if not my favorite pie. One Thanksgiving when I was younger I literally ate so much that I well…lost the pie. ANYWAYYYYYS, it actually comes in a cup, like an ice cream cup (I thought it was going to be more like a shake), and it is just what you would think…ice cream custard blended with a slice of pumpkin pie. While it was delicious and pumpkin-y, it was SOOOO sweet. And so creamy and I mean, it was good, but not great and I don’t think it’s worth the calories.

As far as the other 4 burgers go (yes I am calling the chicken sandwiches burgers because it is meat between two pieces of bread and therefore a burger is also a sandwich), My mom accidentally snagged Alec’s hot chicken sandwich instead of her regular but she couldn’t stop raving about how delicious and juicy it was and how she would come back just for that sandwich, which is saying a lot because she didn’t even really want to eat there. The classic burger (no tomato) is my go-to and it is just one of the absolute yummiest burgers out there (the truffle burger from Umami Burger is pretty dang spectacular too though).

Also, always always ask for a side of the shack sauce to dip your fries in. Like, don’t bother going if you aren’t going to do that.

ALL IN ALL, the 40 minute was worth it, these burgers are just so dang yummy, the Montlake fancy pants burger is worth $11 (barely, because that’s like double a shack burger), but worth it, and pass on the pie ala mode custard and just get yourself a classic shake. I mean, it is the SHAKE shack!

Caution! Infant mandrakes. Approach only with proper ear protection! 🙉⚡️📣 (Also, don’t worry, they yelled for maybe 5 seconds to capture this moment. Easiest picture to take ever lol)
My little milk monster is just here for the boo-bies 👻🍼
Baby Spice is one of the cutest pumpkins in the whole patch (tied with brother spice, obviously) 🧡 maybe I jinxed it with the shirts because these twinnies were definitely feeling extra spicy today (or maybe I just threw off our naptime schedule by forcing pumpkin patch pics), but we made the most of it and somehow got some smiling pics from them. Honestly, it’s the last one for me though 🤷🏼‍♀️
Okay okay, I know I’ve been sharing a zillion of these— I did say I couldn’t pair down my favorites…but this one is definitely already framed in our home 🥺
snuggled up together & comfy, cozy are we 🤍 just kidding, a little too soon for Christmas lyrics…BUT these little twins have been hamming it up today so we had to take the opportunity to show off some of our favorite blankets from @shophighway3 👶🏼👶🏼 these two are going to be sharing plenty of things in their lives, but these blankets are personalized just for them and are cute as can be! #highway3
Hey @chipotle, these new little boo-ritos look pretty darn cute 👻🌯